Designing internal navigation solutions for employees and visitors at Ford. 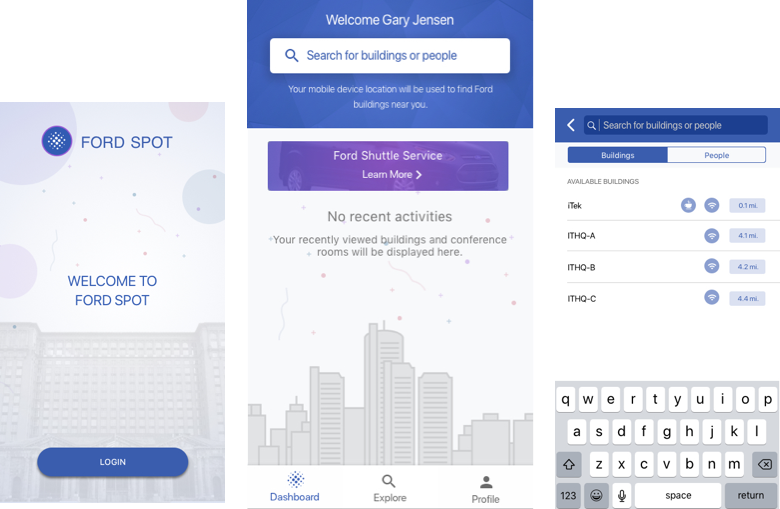 Ford Spot is available to Ford employees on Android and IOS.

There are around 40 Ford Buildings in Dearborn, MI, and 200 worldwide including plants. As a part of the campus transformation initiative at Ford, our team was tasked with coming up with solutions for internal navigation and employee productivity. The goal was to help employees find what they (people, places, things) need quickly in and around Ford buildings.

In order to better understand employee needs around navigation and productivity, I lead the initiative to conduct generative user interviews. I did a brainstorming exercise with the team which included the Product Owner, Product Manager, and a couple of developers in order to hone in on themes and topics we were trying to uncover. I created a topic map from our meeting that included everything we were planning to learn from these generative interviews. 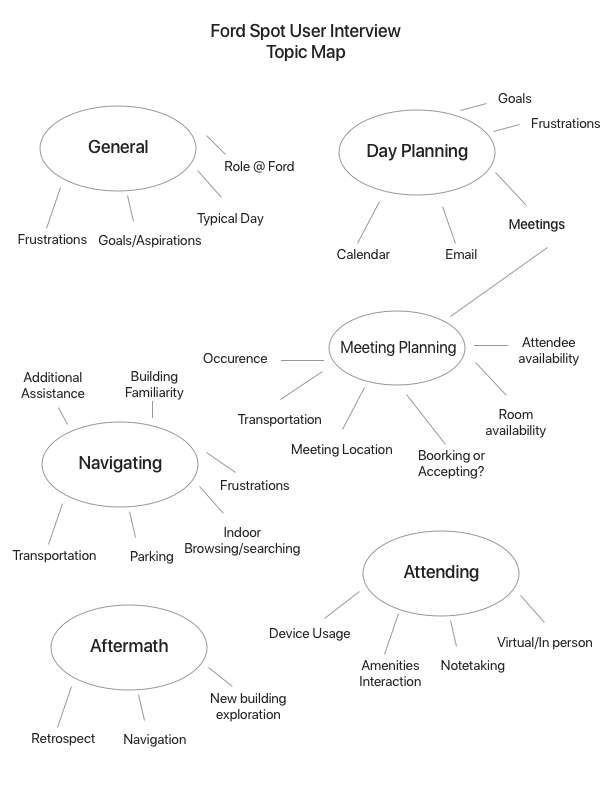 I conducted 10 interviews with Ford employees across 3 different regions with the help of one of our intern Samantha. About half of these interviews were conducted on-premise where employees work, while the rest were done virtually. At this point, I started to see a pattern and few personas were created to show common user groups we will be designing for.

After conducting all the generative interviews, I synthesized all my learnings and created user personas in order to communicate user needs & goals to our team and stakeholder. Locating and booking meeting rooms seemed to the biggest pain points among users we talked to, along with building access, indoor navigation and parking.

After sharing my learnings from the generative user interviews I did another workshop with the team in order to prioritize action items. What do we work on and which problems do we prioritize?

I created a 2×2 Prioritization Matrix with two opposing characteristics (Value vs Difficulty) in order to help us prioritize what we work on. I asked everyone to write down some of the most common user pain points they saw from the interviews and place them on the whiteboard where they see fit. By the end of our long meeting, we had a pretty good idea of which user pain points to prioritize. For starters, we can prototype and test a mobile solution that will help Ford Employees find resources such as meeting rooms, building access information, and common points of interest inside buildings.

We were also aware of the overall employee experience going from building to building and the fact that a mobile app might not touch on all the pain points. I created a customer journey map based on the initial user interviews to showcase the overall employee journey from building to building and where other platforms might come into play. But at his point, a mobile solution seemed more feasible and scalable. 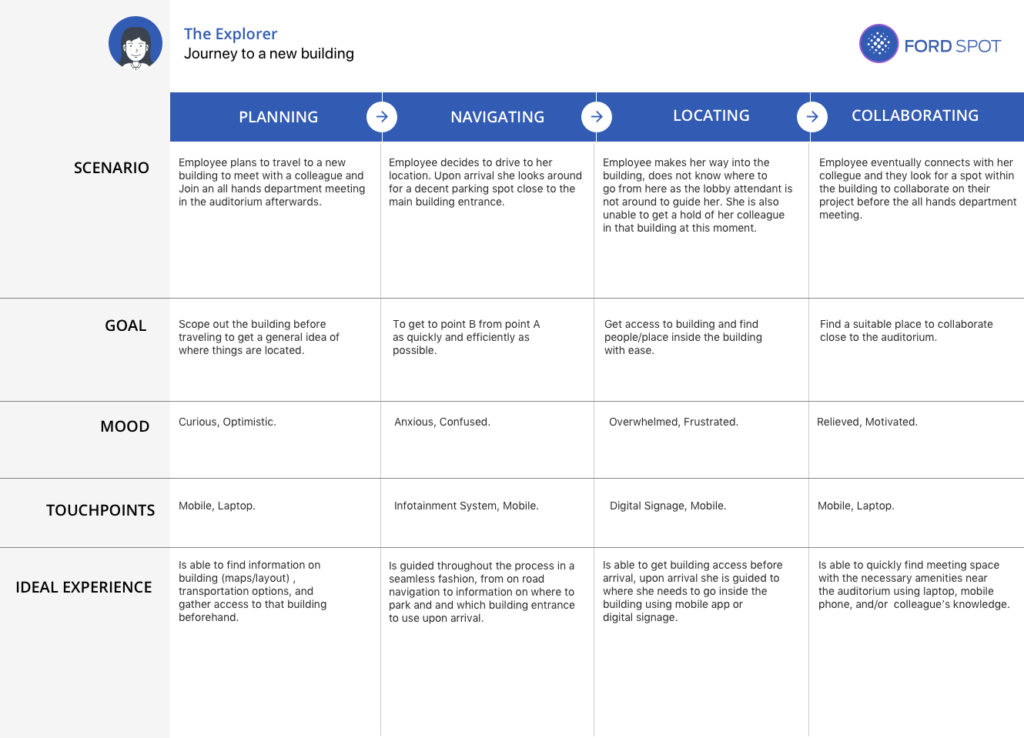 The team (myself, 2 developers, product manager, product owner, and project manager) gathered around to sketch out ideas. Everyone was clear on the problem we are trying to solve and we all did a few quick warm-up sketches. Each of us then took some time to do one detailed sketch by ourselves which was presented to the team. Afterward, everyone used colored sticky dots to vote on the sketch they liked. We also did a branding exercise and settled on the name Ford spot for our application.

I referenced sketches from our earlier ideation session and iterated on it when creating a digital prototype. I created clickable prototypes with sketch app and invision that could be shared with users to help us gather some early feedback before development. Our development team was busy doing the prep work (server configurations, hosting, deployment strategy) while the Invision prototypes were being tested with users. I decided to create mid-fidelity prototypes instead of black and white wireframes as I have had better user feedback with them in my past experience.

After conducting multiple usability test sessions with the mid-fidelity prototypes and iterating on it, I handed over the designs to the developers. Since we were making a native mobile application (Andriod and IOS) we had to keep a close eye on their respective design systems (Material design & Human Interface Guideline). I worked with developers closely when they were implementing the prototype designs to ensure product quality & consistency. 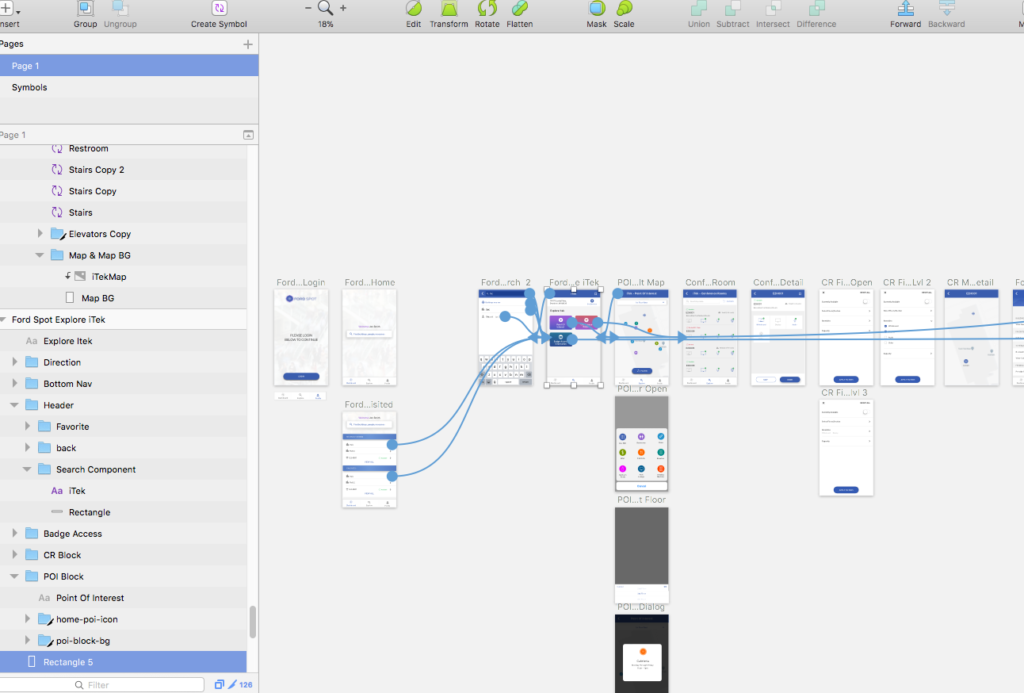 Our first MVP (Minimum Viable Product) version of the app was released to selected Ford employees in a few buildings right before our company trade show demo. 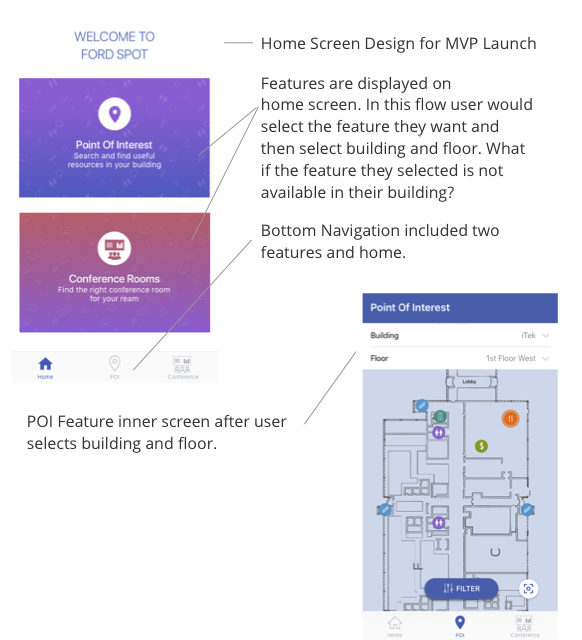 I conducted another round of usability tests with the live Android version of the app. From the user feedback, it was evident that Most employees only care about viewing features in the building they are in or planning on traveling to. 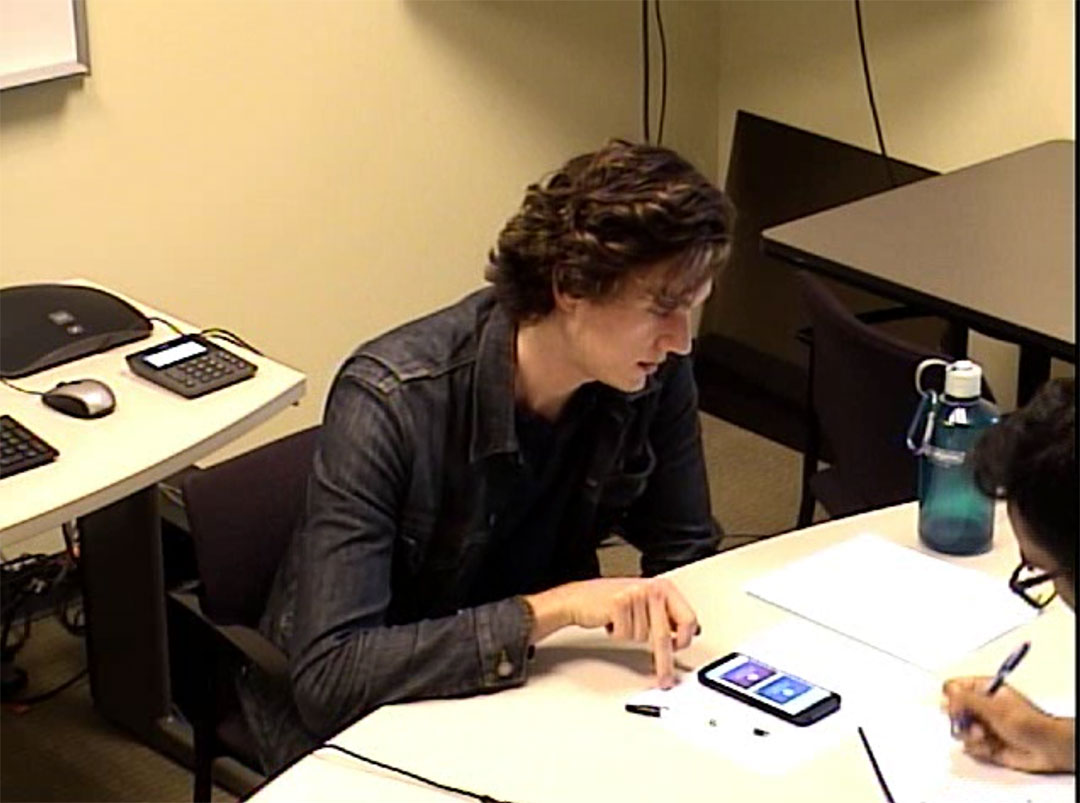 After receiving new insights from the usability tests, we decided to make some design changes that will allow employees to quickly view features in their building. We moved from a feature-centric flow to a building-centric flow for the second release. The design changes led to higher user engagement as we expanded the app's userbase. 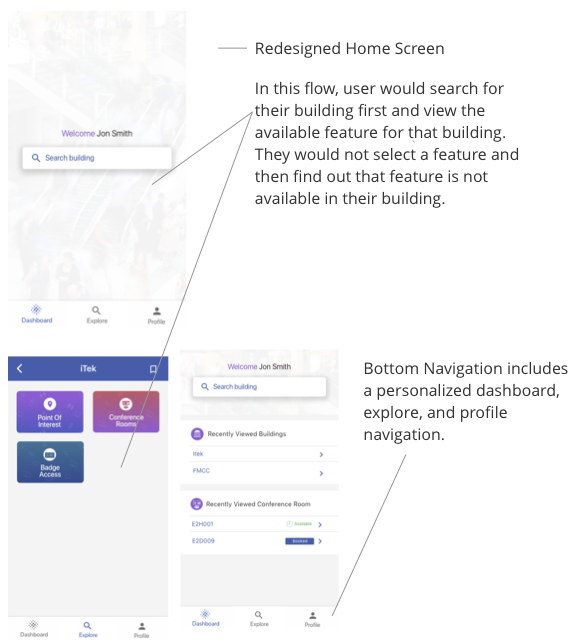 We continued to make data-informed decisions from the qualitative and quantitative feedback we received from our employees. Ford Spot was one of the primary catalysts for future investments in workplace experience solutions at Ford as multiple product teams were spawned after its release. Ford Spot helped us uncover true user pain points around campus navigation as well as other workplace experience needs. I am extremely grateful to have worked on a product like this.